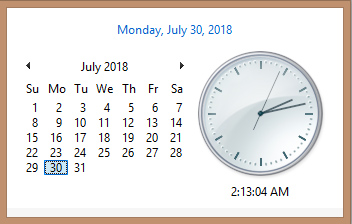 A little less than two days are left in July, making the month’s fifth week quite short, as seen in the graphic to the left.

Blog entries during diminutive weeks like this one are usually nonexistent, and my scheduled tirades are found on the following Saturdays, leaving the last few days blank on the journal’s calendar, as appears on the screen capture from May 2018, shown below to the right. 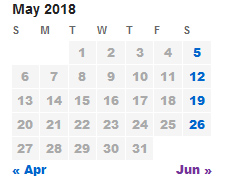 The end of June fell on a Saturday, so all five weeks had notations of a published entry therein.

However, today I was bored and decided to add my thoughts for making five literary contributions in this month.

I did my food-shopping online yesterday morning for the first time ever, since my wheels are disabled (see previous entry) and the pantry was bare. Hitchhiking with a load of shopping bags from the supermarket wouldn’t cut it, in my humble opinion; so I had the items delivered to my front door.

What a pleasant experience it was not to hassle with people’s dilly-dallying, blocking aisles with shopping carts, their running into me habitually; my rushing to look for the best deals to prevent other shoppers from giving me dirty looks for blocking them, or my having to make three trips to and from the car for bringing the supplies up two flights of stairs to my apartment.

The service costs $15.95 above the main total, plus a tip for the delivery person; which, to me, is well worth not having to deal with the dreaded chore, other than putting the stuff away.

While waiting for the groceries to arrive, I thought about not having the luxury of hopping into the Cooper and taking off to wherever I please. Maybe I’ll rent a car tomorrow, but, then again, maybe not.

The unexpected costs for these recent turn of events are not written into my fixed, monthly budget; and besides the forthcoming charges for Thursday’s repairs, a towing bill precedes that.

Thinking back at all the cars I’ve owned, and there were a lot of them, I decided to document each from when I got my drivers’ license and bought my first vehicle. The list goes as follows:

After my getting the Cooper’s CV joint and right axle replaced later this week, my beloved car will need to be state-inspected.

As seen in the photo on the left, it’s due at the end of August.  I’ll push it off until September 3rd (the 1st falls on a Saturday) to be able to procrastinate for an additional month in 2019 until getting it inspected again.

I’ve been pushing off  yearly inspection until the next month mostly every year since the the car left the showroom, except for a few. The auto was inspected originally in November of 2004. After another couple of years it will be back to square one.

So much for this long-winded history of my vehicle idiosyncrasy. Until next Saturday, thanks for stopping in to read another rant, and for your continued support.