Don’t know how I always seem to witness these things. It’s as if they wait for me to get there before doing it.

Having just pulled up to my bird-watching spot at Pennypack Park on the Delaware River in Philadelphia, I noticed one of the resident bald eagles had landed on the ridge before me, on the other side of the fence at the end of the soccer fields’ dirt parking lot. By the time I had hopped out of my car with the camera, the bird had taken off with a clump of mud and grass in one of its claws. 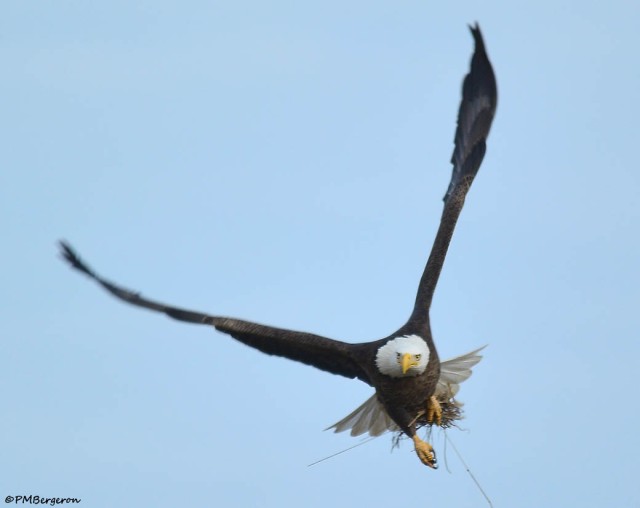 Bald eagle with a clump of mud and grass for its nest.

Not knowing which one it was, I followed the bird with the Nikon as it flew back to its digs with the organic mortar for shoring up the nest’s stability, as seen in the following series of photos. 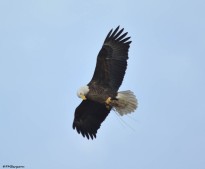 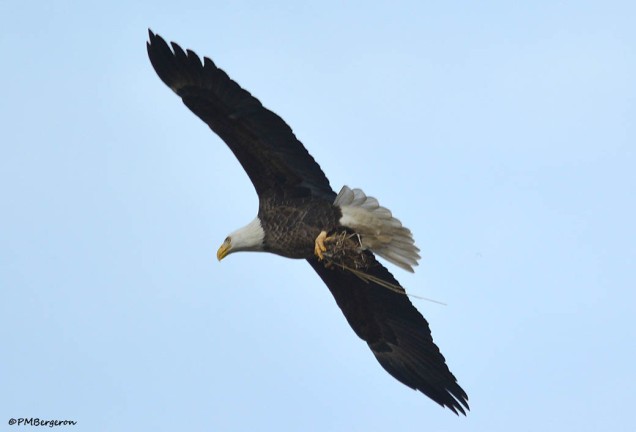 The raptor flew into the nest from the backside, and I wasn’t able to get any photos of its approach; but I did notice a white head and eyeball, looking at the camera from inside the middle of the nidus. Look closely at the next photo and you’ll see what I’m talking about:

Got my eye on you!

In doing so, the eagle’s hormones must have gotten stirred up; for the next thing I knew, the bird flew out of the nest and ended up doing the hokeypokey on its mate’s back atop the Philadelphia Men’s Jail-yard lamp, as seen in the photographs below: 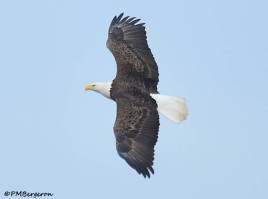 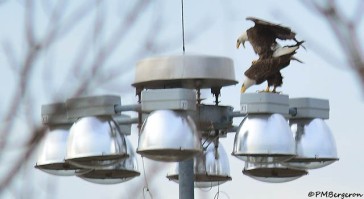 In other polite terms, the cloacal kiss—avian nomenclature for copulation—took place on 27 January 2018; and we expect the eggs to drop by Valentine’s Day, how apropos. After that, a five-week incubation period for gestation should take place, and a brood of eaglets will be expected toward the end of April.

Of course, the birds mate several times before the eggs land in the nest. I’d like to think this was the one that did it.

Last year, I caught the Lake Luxembourg bald eagles doing it, as well as the Burlington Island birds. My beloved ospreys will be returning at around the second week of March, and I seem to catch them all doing the hokeypokey as well.

I just wish my luck for observing birds’ copulating would morph into winning the lottery, or the Publishers Clearing House Sweepstakes. Last week two more entries for the latter were signed, licked, sealed, stamped and mailed out for delivery. Two more are awaiting in my snail-mail inbox to be completed and sent out. It never stops.

Not to mention that on last Sunday, the price of stamps went up another penny to 50¢ a clip for first-class postage.

All of the aforementioned entries are for the big Forever Giveaway on February 23rd, when the grand prize of $5,000.00 per week will be awarded to some lucky dingbat like me, until death do them part.

As they say, whomever they are, you can’t win if you don’t play. “One of these days my ship will come in,” I keep saying to myself; although, if the Prize Patrol doesn’t visit me on the 23rd, which is a Friday, that will be it.

If that’s the case, to end on a poetic note:

No more dad-burned stickers’ residual glue and nasty taste on my tongue for me,
In the trash those future entries all will be!
Nevermore shall I place another first-class postage stamp,
On a PCH Sweepstakes return entry’s envelope, about which I’ll never hear back.

Thanks, as always, for stopping by to visit, and for your continual support.

2 Responses to Doing the Hokeypokey