The Only Thing That’s Certain in Life is Death and Paying Taxes, and the Return of My Beloved Ospreys.

Finally filed the state and federal income taxes this week, way ahead of time this year for once, almost two weeks before the final deadline. This past Wednesday was a rainy day, which was conducive for staying in and getting it over with, instead of prolonging the agony of any further procrastination.

This early filer is getting a federal refund for the first time in a while: $12.50! Please don’t tell me not to spend it all in one place, although, it passed through my hands immediately and theoretically as I signed the check to pay for my Pennsylvania return. Easy come, easy go.

Tomorrow’s Palm Sunday, and Passover is on Monday for those who celebrate the religious events. Easter follows next Sunday for Christians, and Passover ends on Tuesday the 18th for our Jewish friends, Tax Day for 2017, sort of an irony in itself, which means I’ve got another week of biting my tongue until my Lenten fast of having given up politics expires.

Believe me, I’ve had one hell of a time keeping my mouth shut with all the nonsense that’s prevailed during this past fasting season.

I’ve finished the annual survey of beloved ospreys along my stretch of the Delaware River, given to me by William Penn in a past life; although, no legal deeds therefrom can be produced. It’s just a strong feeling and love for the area that makes me say that in jest. Perhaps that’s why I have such an affinity for Sarobia and the Robert Logan story.

By the way, recent shots of the venerable, old estate have been added to Sarobia’s photo journal, if you’re interested.

Osprey Distribution Map for 2017 Along My Stretch of the Delaware River.

The survey comprises an area of 18.6 miles/29.9 kilometers, starting southwesterly in Riverton, NJ, extending to the northeastern tip of Burlington Island, NJ.

On the map above (click on it for the full size), the red lettering and Xs with white borders indicate where the existing pairs of nesting ospreys are found. The two entries with black borders determine where nests had been in the past but no longer are there for 2017. 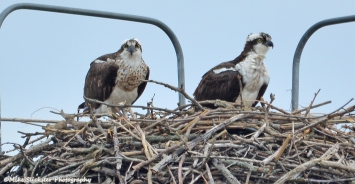 The birds’ digs are all on channel or range markers in the river, as seen above. They seem to like them, as it’s most convenient for their food supply (fish); and the towers are out of the way from human and predator encroachment, except for boats and other flying creatures that have enough tenacity to threaten them, which are few and far between.

The raptors return to the same nest occupied during the previous season, usually every year around St. Patrick’s Day. This year their appearance was delayed for a week by the winter storm we had on the 15th and 16th, as seen below. 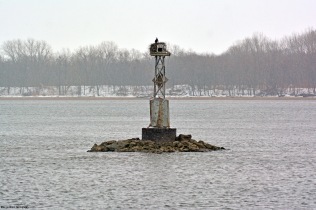 Andalusian Ospreys’ Nest with a cormorant on March 16, 2016. 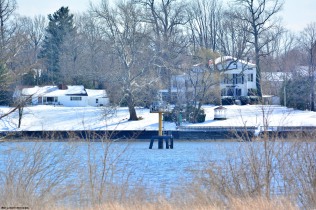 Here’s last year’s distribution map for comparison. It’s virtually the same this season, except for the Marina birds are no longer there; and a pair are on a different channel marker in Riverton, NJ. Perhaps they are the same ones. Ospreys are known to change their locations on occasion.

As was the case for last year, 2017 has eight pairs situated along the stretch of the Delaware that’s included in my avian biological study, with one rearrangement, showing the usual consistency of the species.

The next map to be produced in the future will show the success of the nesting pairs with producing progeny and their amounts, which will be tallied by the end of May. Ospreys have an incubation period of five weeks for the eggs to hatch. Some of the birds are already incubating as assumed by their roosting behavior.

For a photo journal of this season’s family of ospreys from the survey, please click here.

In closing, allow me to share my latest attempt at being a rock star with a cover of a tune by Everclear. It’s a sad tale about the writer’s feelings for having experienced the suicide of his girlfriend at the time, who jumped off the Santa Monica Pier in California.

Thanks for listening, and for your continued support.