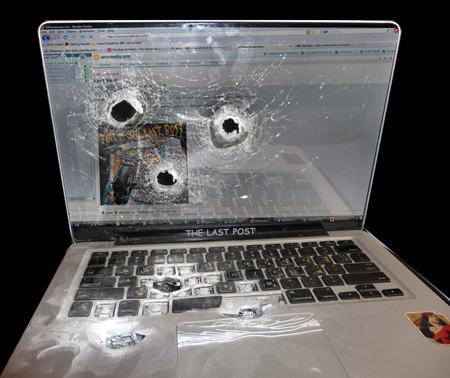 Having a stressful job can lead to health issues, psychological problems, increased animosity toward mankind—many times aimed at coworkers.

Stress is one thing, but to be surrounded by nincompoops at the same time can lead to one’s deviance from society. I’m not talking about going postal here.

One morning, while walking into work, I had my camera bag in one hand and tripod in a vinyl case strapped around my shoulder. One of my colleagues from the other side of the large room shouted over to tell me no firearms were allowed on the property, evidently thinking I was shouldering a shotgun.

Everyone in the office stopped what they were doing and looked over at me, frozen in place, terrified as if they were all going to die at any moment. I unzipped the bag, pulled out the tripod, pointed it like a rifle at the jerk who yelled out such an absurd comment.

“Pow, you’re an idiot, Sherlock (not his real name),” I said, after which my coworkers’ faces of extreme horror had changed to that of instant relief.

Nervous laughter erupted; then looks of anger hailed as if daggers were hurtling from each employee’s eyes, fired like archers’ arrows strait at this fellow who thought I might have been a candidate for admittance to the cuckoo’s nest. Lucky for them I wasn’t. That sure woke everyone up, by golly!

There were days when I was so fed up with the daily grind, however, my thoughts would wander to what would I do otherwise? Writing was always a fun thing for me, not anything serious, yet something I took joy in doing.

My lingering daydreams would sometimes put me in the hallowed halls of Hallmark as a staff writer for a new line of greeting cards for disgruntled employees. I’d think up lines and sayings to place inside these mementos of seething adulation, some of which would read like the following:

I doubt any of the above sayings would end up inside a greeting card, but my stress was alleviated for another spell, and I’d be able to carry on with my mundane routine until being provoked by absurdity again.

Funny how we find ways to mimic a pressure-relief valve for the brain. Now that I’m retired, my stress level is at just about zero. Having to do the dreaded food-shopping tops my list right now for causing anxiety. I have a couple more days to procrastinate with a couple of cans of Chef Boyardee waiting in the cupboard.

These ramblings are meant for me to blow off steam as well. Thanks for allowing me the privilege of your continued support.

As an early retiree with an honorary doctorate degree from the proverbial "School of Hard Knocks," this upcoming author with a lot of free time on his hands utilizes his expansive repertoire for humorous yet tragic, wildly creative writing that contains years of imaginative fantasy, pure nonsense, classic slapstick, extreme happiness and searing heartbreak; gathered by a wealth of personal experiences throughout his thrilling—sometimes mundane or unusually horrid—free-spirited, rock-'n'-roller-coaster ride around our beloved Planet Earth. Mike Slickster's illustrious quest continues, living now in Act Three of his present incarnation, quite a bit on the cutting edge of profundity and philosophical merriment as seen through his colorful characters, most notably evident in the amusing Thirty Days Across the Big Pond series, all of which can be found at Lulu.com.
View all posts by Mike Slickster →
This entry was posted in General and tagged adulation, animosity, archers, Chef Boyardee, daggers, daydreams, deviance, firearms, Hallmark, horror, karma, killer, mankind, MTV, PBS, procratination, psychological problems, satan, seething, Sherlock, stress, terrified, writing. Bookmark the permalink.