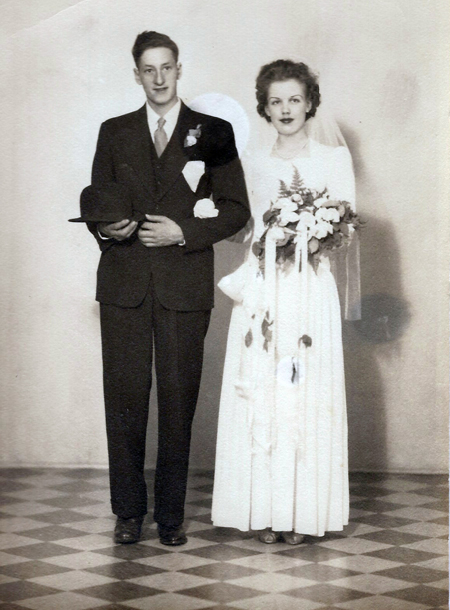 Today’s the ninth anniversary of my father’s death. I was going through some old pictures yesterday, reminiscing about him, my youth, the unusual circumstances that surrounded my mother’s untimely demise, and his unbefitting parting from this dimensional plane. Mother’s Day always falls around this same time of year, jogging the cobwebs from my memory as well.

My folks had separated rather unpleasantly when I was twelve. They parted ways abruptly one evening. Mum found a room in Ridgefield Park, and she began to work as a waitress in Hackensack, my hometown.

Both parents seemed definitely like they never wanted face one another again. Mom would never pick me up at home. I visited Lee—Mum’s name for short, Leona for long—at the diner where she worked, eat a burger and chit-chat there as a result.

Sometimes we’d meet at Sam’s Saloon, sit at the bar and have a few drinks. My fascination with Brandy Alexanders started during those clandestine rendezvous, during which she’d allow me to taste her cocktail from time to time while the bartender was facing the other way; but I had to settle otherwise for a Roy Roger’s: ginger ale on the rocks with a maraschino cherry floating at the bottom.

Lee had moved into a rooming house. I don’t think she wanted me to go there, as I was never invited. We would see each other only at public locations, which was all right with me. I was familiar with cheap, dreary, dingy rooming houses. Her brother ran one elsewhere as a caretaker. We’d visit him often as he also lived there. The rooms were dark, smelled musty and old like an abandoned shack in the woods, and at best weren’t at all attractive.

Over a year had passed since Lee became settled into her new digs when my father and I returned from a trip to Canada at the last part of the summer, to find Mum had been brought to the hospital and was in extremely critical condition. It was the year in which I had graduated from grammar school.

The long labor-day weekend had ended following my father’s yearly jaunt to Québec, a big family tradition when he and his five brothers would rent a space for an amusement booth at the regional-township fair. My uncles and he ran a spinning wheel of fortune. People bet a dime on a number to win one dollar in return, if their number came up.

The brothers usually made out pretty well by Sunday evening when they dismantled the game corral. Aside from paying the rent, the siblings would divide up the rest of the massive quantity of coins. I always enjoyed going up with him, as my cousins and I had the run of the fair for the whole weekend; and we always had a blast multi-sampling every one of our favorite rides, eating all the scrumptious, carnival junk food; and riding horses from the stable on the fairgrounds that rented hacks per the hour.

Upon our arrival at home from the holiday-weekend extravaganza, my mum’s brother awaited us in our driveway to be the bearer of bad news. He knew Dad’s habits and we always returned from Canada at the same time. Lee had been found unconscious on the bathroom floor of her rooming house and transferred to Bergen Pines Hospital.

The following day, on which I was scheduled to begin my freshman year in high school, I took a bus to the county hospital, several towns away, for visiting my ailing, hardly recognizable parent. She looked meager like a skeleton covered with just a thin layer of skin wrapped around her pronounced bones with stringy, unkempt hair atop her head; Mum’s body was clad in an ugly hospital gown. Lee had lost seventy pounds over the past weekend from what was soon found to be cancer of the uterus.

Her attending physician admitted to us after pronouncing her dead, that when the surgeon went in initially to explore, the decision to close her right back up was immediate, for she was too far gone.

My relationship with my father waned considerably after my mother was buried, and I became very bitter, blaming him for her unforeseen death. Any respect that might been left for him and the money he had loved so dearly, turned rapidly into scorn.

Fortunately for me, although many years later, Dad and I mended our estrangement and became the best of friends. My marriage and a new baby boy, eventual divorce, and my beginning to turn into my father started me to realize Pop wasn’t such a villain after all. There are always two sides to every story.

Pop eventually moved back to Québec. My son and I would visit him at least once or twice a year, until I had the heart-wrenching task of moving him into a nursing home due to his complications from Parkinson’s Disease, doing him in ultimately.

Now that my dad is gone, I miss his words of guidance often, something that made me tune him out with a deaf ear when I was a youngster; but later in my life, his wisdom was valued and just a phone call away.

My birthday is next week, making me nostalgic as it does every year, prompting me to write this essay and fulfill yet another overdue entry into this illustrious journal. 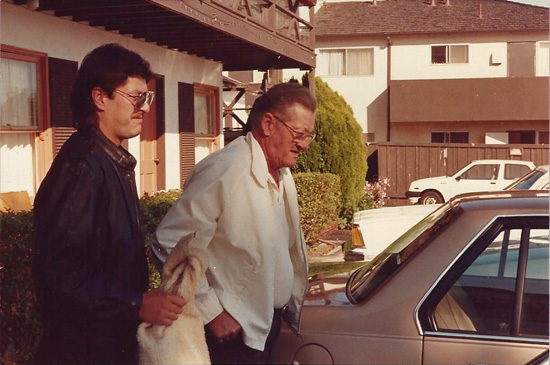 Slickster and His Pop in 1986. Note they both have the same nose; their similar grimaces were a result of a losing night in Lake Tahoe.

Pop’s death on May 8, 2006, made my birthday at the time (three days later), the least enjoyable ever. Having to arrange his funeral wasn’t my idea of a party. A kind cousin baked a birthday cake and had a nice, quiet get-together for me, affording some much needed comic relief.

Life goes on, and springtime yields all its beauty and pleasure in my neck of the woods, May’s eternal, special gift given annually to me.

Thanks for your continued support and allowing this sentimental writer to bear his soul on occasion.

As an early retiree with an honorary doctorate degree from the proverbial "School of Hard Knocks," this upcoming author with a lot of free time on his hands utilizes his expansive repertoire for humorous yet tragic, wildly creative writing that contains years of imaginative fantasy, pure nonsense, classic slapstick, extreme happiness and searing heartbreak; gathered by a wealth of personal experiences throughout his thrilling—sometimes mundane or unusually horrid—free-spirited, rock-'n'-roller-coaster ride around our beloved Planet Earth. Mike Slickster's illustrious quest continues, living now in Act Three of his present incarnation, quite a bit on the cutting edge of profundity and philosophical merriment as seen through his colorful characters, most notably evident in the amusing Thirty Days Across the Big Pond series, all of which can be found at Lulu.com.
View all posts by Mike Slickster →
This entry was posted in General and tagged Bergen Pines Hospital, birthday, canada, Cancer of the Uterus, Dad, death, hackensack, Labor Day, lee, Leona, mom, mum, pop, Québec, reminiscing, Ridgefield Park, rooming house, Sam's Saloon, waitress, wheel of fortune. Bookmark the permalink.

2 Responses to Spring is Eternal