The holidays are over with and forgotten—that is until now by bringing them up again—so it’s better to let sleeping dogs lie until Thanksgiving yet to come; although, we’ll start hearing about them certainly in October, or even September.

Each year the yuletide season seems to manifest earlier and earlier. Look here, it’s not even the third week in January, and the days of goodwill toward men, women, children and all creatures are found in these weekly ramblings.

Too bad those sweet sentiments couldn’t last all year round, at least the “peace on earth” part of the deal. Only one week had passed in 2015 before the horrific events in Paris took place, starting on 7th; need I mention the unsavory details?

My sincere condolences are sent out to the families of the slain cartoonists, staff of the targeted newspaper, police, hostages, and France as a whole.

Chanukah ended on 24th December. The Christian celebrations terminated on the 6th of this month, commemorating the arrival of the Maji (some sects consider the conclusion to be on the first Sunday after New Year); so now it’s back to business as usual.

How about New Year’s resolutions? Are yours still in effect? Did you make any? My list was short: to be less cynical, bitter; more loving and patient toward my fellow human beings.

I’ve been doing pretty well on them thus far, making a concerted effort still to keep my sometimes razor-sharp tongue well-implanted in my cheek, often clenched between my teeth.

The same applies to my typing fingers during off-the-wall rants on social media, even if justified in many instances; albeit some sarcastic remarks did slip through, for which the diatribe was deleted quickly on second thought.

My yearnings now point to spring with my having had enough of this winter already, not quite a month since the solstice. In the meantime, today is a month away from marking another milestone: the one-year anniversary of buying the now-petrified grapefruit that resides in the fridge as a science project, testing its longevity.

The full explanation of the odd-ball results thus far for this closely documented and photographed study can be reviewed by clicking: https://mikeslickster.wordpress.com/?s=grapefruit.

The significance of the aforementioned one-year earmark relates to the conclusion of phase one of the project, noting the once-edible fruit is now hard as a rock. Think of Stonehenge then think of this illustrious orange orb as being Stonefruit.

The second part will now measure the time it takes to decompose naturally out on the terrace, also to study if a squirrel will attempt to haul it away, or if the birds that live in the terrace above me will peck through the rind and demolish it as a mid-winter snack. 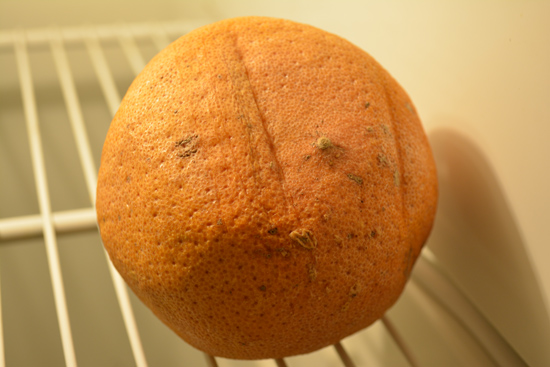 Still handsome as ever!

Our hero may survive any carnage out there on the balcony, considering the seasonal temperatures will be keeping the grapefruit refrigerated, one of the conditions for its present, rock-like state. The sparrows may not be able to penetrate past the outer skin, nor will a squirrel be able to pick it up and haul it away. The fruit weighs as heavy as a regulation softball, and won’t fit under the railings.

The final phase will be when the weather breaks at spring, bringing the outdoor temps way above freezing to either allow decomposition, or make a tasty dessert for the critters.

One last update deals with my green-coffee-bean diet, which is documented also in the posts contained in the previously mentioned link about old Stoney. I reached my goal of weighing 200 lb/90.7kg/14st 4lb between Christmas and New Year, and have stopped taking the extract. My weight has remained constant, but I still eat moderately and exercise. However, I’ve splurged from time to time, although rarely. It has to be a special occasion to pig out.

For some reason, Stonefruit reminds me of Mr. Bill, a character on Saturday Night Live back in 1976. Take another look at the photo above and the following clip to compare. What do you think?

As an early retiree with an honorary doctorate degree from the proverbial "School of Hard Knocks," this upcoming author with a lot of free time on his hands utilizes his expansive repertoire for humorous yet tragic, wildly creative writing that contains years of imaginative fantasy, pure nonsense, classic slapstick, extreme happiness and searing heartbreak; gathered by a wealth of personal experiences throughout his thrilling—sometimes mundane or unusually horrid—free-spirited, rock-'n'-roller-coaster ride around our beloved Planet Earth. Mike Slickster's illustrious quest continues, living now in Act Three of his present incarnation, quite a bit on the cutting edge of profundity and philosophical merriment as seen through his colorful characters, most notably evident in the amusing Thirty Days Across the Big Pond series, all of which can be found at Lulu.com.
View all posts by Mike Slickster →
This entry was posted in General and tagged Chanukah, Christian, christmas, decomposition, grapefruit, green coffee bean, Green Coffee Bean Diet, Green Coffee Bean Extract, holidays, Je suis Charlie, Maji, Mr. Bill, new year, paris, rants, resolutions, saturday night live, sleeping dogs, social media, Stonefruit, Stonehenge, Thanksgiving, yuletide. Bookmark the permalink.