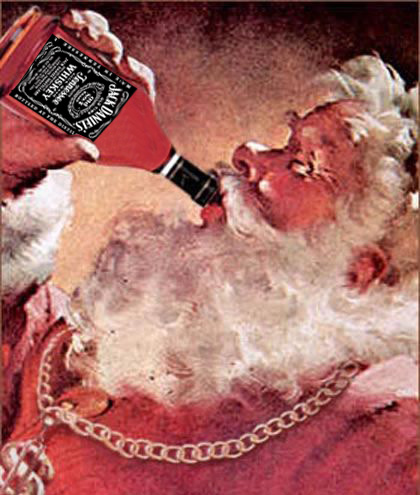 Today, I thought I’d share with you my great-grandmother’s recipe for making the age-old, dreaded fruit cake. I’ve got a bowl, an electric mixer and a portable oven to save time. The following ingredients make the best fruit cake one ever tasted:

1 plastic dispenser at least half full of lemon juice

Being that it’s the holidays, I am jumping off the wagon temporarily to sample the whiskey, checking for quality. [Sip] Ah, my good, old friend, Jack Daniels.

To begin with, we take a large bowl, check the whiskey again to be sure it is of the highest quality, pour out one level cup and drink. Repeat.

Next, turn on the electric lixer thingamajiggy and beat one cup butter in a large, fluffy bowl. Add one teaspoon sugar and beat again.

Turn off mixer, break two legs, add to the bow, and chuck in the cup of dried fruit. Now, mix on the turner. If the fried druit gets stuck in the eaterers, pry it loose with the drewscriver.

Right On! Next, sift two cups of salt, or something. What the hell, who cares? Check the whishkey! [Chugaluga] Ah, (barf) hheresh to Jack Black, my buddy: Johnny Walker Red, and not to mention, Jimmy Bean.

All righty then, we shift the lemon juice and strain your nuts. Add one table, a spoon, sugar or anything. Whatever you can find. Turn the cake tin to 350 degrees. Don’t forget to beat off the turner. Thow the bow out of the window. Lesh check the whiskey again.

As an early retiree with an honorary doctorate degree from the proverbial "School of Hard Knocks," this upcoming author with a lot of free time on his hands utilizes his expansive repertoire for humorous yet tragic, wildly creative writing that contains years of imaginative fantasy, pure nonsense, classic slapstick, extreme happiness and searing heartbreak; gathered by a wealth of personal experiences throughout his thrilling—sometimes mundane or unusually horrid—free-spirited, rock-'n'-roller-coaster ride around our beloved Planet Earth. Mike Slickster's illustrious quest continues, living now in Act Three of his present incarnation, quite a bit on the cutting edge of profundity and philosophical merriment as seen through his colorful characters, most notably evident in the amusing Thirty Days Across the Big Pond series, all of which can be found at Lulu.com.
View all posts by Mike Slickster →
This entry was posted in General and tagged fruit cake, Jack Daniels, Seasons Greetings. Bookmark the permalink.