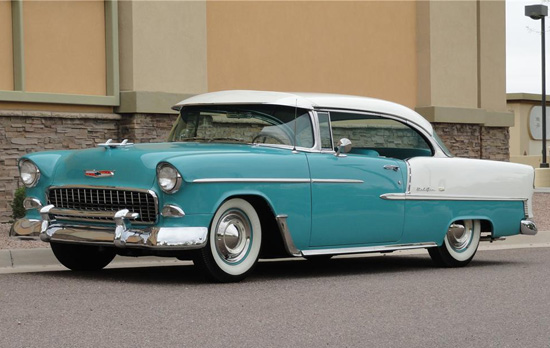 My first time in the Big Apple had been a couple of years prior to the Radio City Music Hall melee. During the original excursion, my father drove us there in his beloved green-and-white, two-tone automobile: a ’55 Chevy Bel Air. I loved riding in that car. It felt like a spaceship to me. 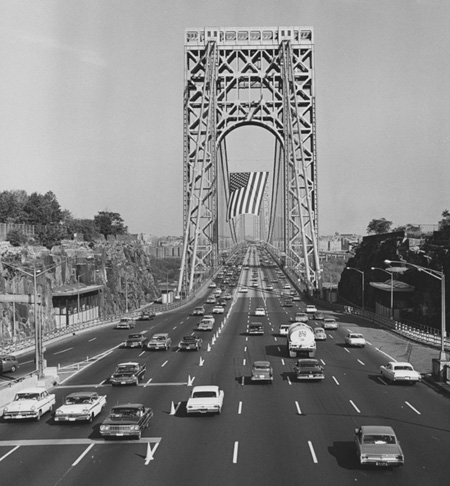 We traveled a different, scenic route: motoring over the breathtaking, awe-inspiring George Washington Bridge, with an extraordinary vista of the skyscraper-laden shoreline of Manhattan Island in New York, and the outstanding cliffs of the magnificent Palisades in New Jersey. 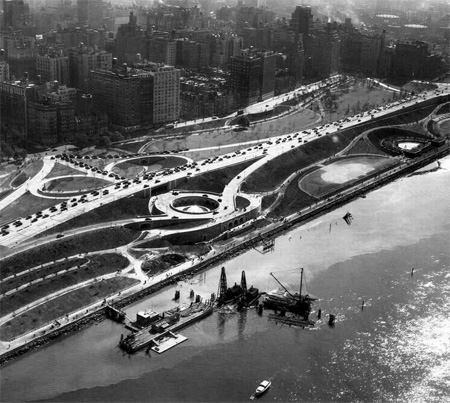 Taking the Henry Hudson Parkway from the Bronx and cruising alongside the Hudson River to Midtown Manhattan, we admired the old brownstones and statuesque buildings to the left of us, relishing the grandeur of the waterway to the right, complete with the plethora of river traffic and the spectacular precipice on the New Jersey side; passing a myriad of shipping piers, lined up one after the other with massive, ocean-going vessels docked in slips between most of them; and finally ending up underground in a crowded parking garage across the street from the Empire State Building, our intended attraction. 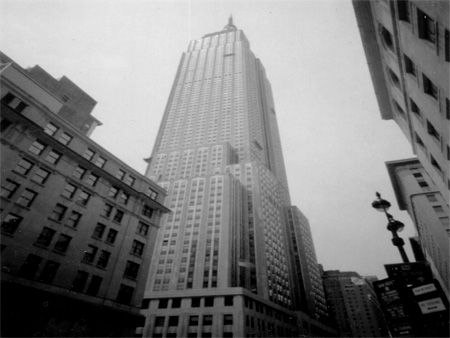 After the family ascended to the 86th-floor observation deck of the towering, 102-story mega-structure, including our standing in line beforehand to buy admission tickets and waiting in another queue to get onto the elevator, my dad put me on his shoulders once outside the building and into the fresh air, to appease me after my older brother threatened—as we were riding up in the lift—that he was going to throw me off the top when we got there. From my vantage point, it felt as if I was a bird, flying higher than any other; looking at the miniature, fragmented world below from above in the wild, blue yonder. My ongoing fantasy fizzled fast when I suddenly noticed a pigeon was perched on the ledge next to us. Those dirty birds were everywhere. 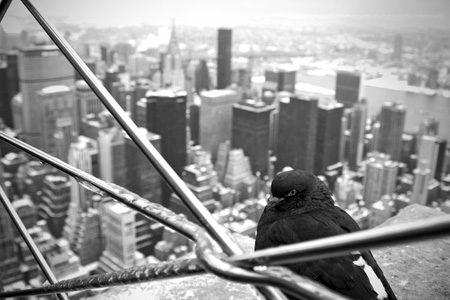 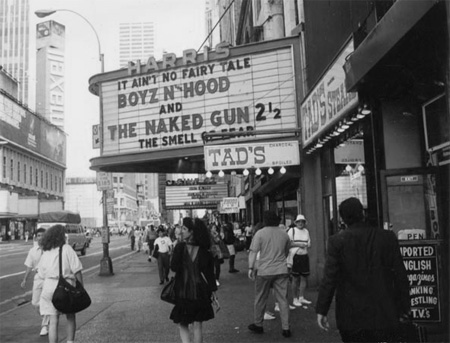 Two long city blocks occupied our stroll southeasterly toward Rockefeller Center with outrageous sights I had never seen or imagined. We turned left on the far side of Sixth Avenue, officially renamed “The Avenue of the Americas.” In 1945 Mayor Fiorello La Guardia—the celebrated, five-foot-tall, so-called Little Flower of New York City—changed the name of the then-shabby thoroughfare in honor of the newly formulating Organization of American States, placing placards on streetlights that signified the various members involved, with hopes of garnering trade within the Western Hemisphere and revitalizing the sector to a more glamorous setting, having been scarred by the demolition of the Sixth Avenue elevated-IRT train line in the late ’30s. The area became known as Midtown, and new commercial high-rise structures began sprouting up like weeds. However, NYC residents still called the area “Sixth Ave.” 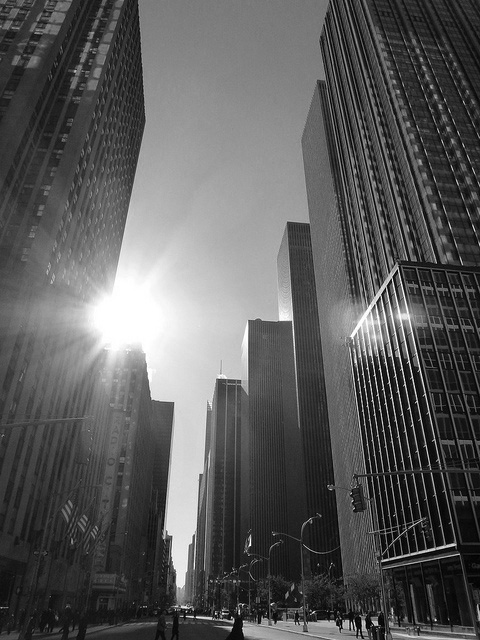 Avenue of the Americas

By this time the grownups began to complain about walking. Nine blocks north were left to go. “We should have taken the subway,” my seemingly agitated mother said. “My feet are killing me. We’ll definitely take one back to the bus terminal after the show. I’m certainly not walking through this den of iniquity after dark.” 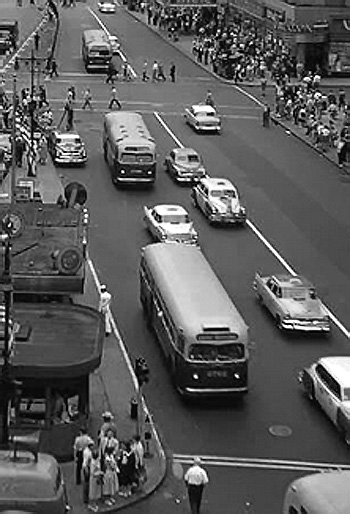 “Mais oui, c’est une bonne idée,” my eldest cousin Lise from Canada exclaimed and began to wave frantically at the bus. Evidently it stopped there normally. Several passengers got off before we got on.

“Does this bus go to Radio City Music Hall?” inquired my mother, who spoke English fluently. She was the first to get on. Her father was an Englishman who married a French Canadian girl after the First World War and settled in his wife’s hometown along the US-Canadian border in Québec. The household was bi-lingual, thus Mum’s proficiency with the language.

“Yes it does, Lady,” the bus driver replied. He looked as if he could have been Ralph Kramden’s understudy. “Would you mind hurrying it up? I’ve got a schedule to keep.”

“Here’s one dollar and five cents. That should cover us all,” she said smugly after uttering a few expletives in French, which made us all laugh jocosely. Obscenities were something rarely heard out of her mouth. Mom waved excitedly for us to follow her and we were on our merry way. Next stop was Rockefeller Center.

As an early retiree with an honorary doctorate degree from the proverbial "School of Hard Knocks," this upcoming author with a lot of free time on his hands utilizes his expansive repertoire for humorous yet tragic, wildly creative writing that contains years of imaginative fantasy, pure nonsense, classic slapstick, extreme happiness and searing heartbreak; gathered by a wealth of personal experiences throughout his thrilling—sometimes mundane or unusually horrid—free-spirited, rock-'n'-roller-coaster ride around our beloved Planet Earth. Mike Slickster's illustrious quest continues, living now in Act Three of his present incarnation, quite a bit on the cutting edge of profundity and philosophical merriment as seen through his colorful characters, most notably evident in the amusing Thirty Days Across the Big Pond series, all of which can be found at Lulu.com.
View all posts by Mike Slickster →
This entry was posted in Past Posts from Live Journal and tagged avenue of the americas, bums, empire state building, fiorello la guardia, new york city, pandhandlers, prostitutes, radio city music hall, Ralph Kramden, rockefeller center, sixth avenue, tramps. Bookmark the permalink.

2 Responses to Death Averted by an Angel: Part Two